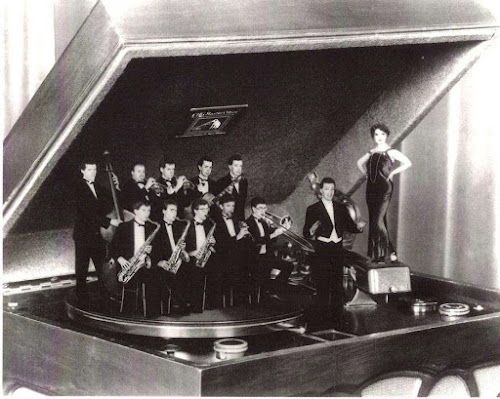 The Piccadilly Dance Orchestra was founded by Michael Law in 1988. In October of that year the orchestra met for the first time to record two songs, Santa Claus Is Comin' To Town and Two Sleepy People, which were issued privately as the two sides of the orchestra's first ever release, a vinyl single.

PRT records (formerly PYE records) liked it and reissued the single in time for Christmas 1988, then recorded our first album, Let Yourself Go, which was released in April 1989 on CD, cassette and vinyl LP record. In 1993 the orchestra began a series of recordings for John Yap's TER/JAY records at the world famous Abbey Road studios. Their sixth album, Brighter Than The Sun, recorded ‘live’, was released on the PICCD label in 2011.

In 1992, Alan Bennett-Law joined the orchestra with the aim of matching the standard of administration, technology and customer service to the already high standards of the music. Within a short period of time, Alan negotiated the recording contract with TER/JAY records and his dynamic ideas and enthusiasm took Michael and the orchestra from strength to strength, playing for many top events and parties, as well as developing musical programmes for concert performances.

The PDO's performance highlights have included many years playing for dancing for the Henley Festival, Earl Spencer's 30th Birthday Party (where Princess Diana asked the orchestra to play In The Mood - twice!), special BAFTA awards parties for Julie Andrews and Sean Connery, the first ever Proms In the Park and a residency at The Ritz Hotel in Piccadilly. Michael Law then achieved a lifelong ambition when the orchestra began a series of Saturday night dinner dances (Stompin' At The Savoy) at the cradle of British Dance Band music, the Savoy Hotel in October 1997, which continued until December 2003. Other clients include Sir John Paul Getty III (40th and 50th birthday parties and a ball at Clarence House where Baroness Thatcher led the dancing), Sir Terence Conran, Earl Spencer's ball to celebrate 500 years of Althorp House and many corporate events.

The orchestra have been seen on television for Wogan, Daytime Live, Pebble Mill, Play It Again and Lorraine Live. BBC live radio broadcasts include: for Radio 2 (Radio 2 Arts Programme, Friday Night is Music Night and the VE Day celebrations from Hyde Park), Radio 3 (a live lunchtime concert from the Wigmore Hall) and Radio 4 (a special edition of Loose Ends to celebrate the 75th anniversary of the BBC).

Acclaimed worldwide for their spirited recreations of the music of the British Dance Bands, Michael and the PDO were especially chosen for BBC 4's highly successful Len Goodman's Dancing Feet (first broadcast in December 2012) and in July 2013, filmed a sequel, Len Goodman's Dance Band Days.

The PDO recorded their 7th and 8th CDs in 2018 and 2021 and continue to tour, battling the effects of the pandemic on the theatre and entertainment industries. Events have included performing for the Lord Mayor of London and the 150th Anniversary Ball for The Hurlingham Club.

…and you can catch The PDO in the Helen Mirren/Michael Caine movie "Last Orders", playing Chattanooga Choo-Choo!